Last night I was snuggled in my bed with Arabelle. We were all cozied up in a pile of blankets trying to hold off the last effort of Winter to make any real impression on the north Texans this year. It was chilly, but honestly, I think he failed in his attempt–no real winter here this year.

Arabelle had her head on my shoulder and my face was nuzzled into her hair. It was one of those perfect moments that make life just so beautiful.

Unfortunately, the topic of conversation wasn’t quite so beautiful. We were chatting about all the pre-teen drama that little girls create, and boy do they create a lot!

As I listened to Belle’s tales of woe, I found myself thinking back to my own pre-adolescent years, and I wasn’t feeling very nostalgic! I cringed inwardly as the memories of awkwardness, insecurity, and immaturity came flooding back. Those years are just so hard! Doesn’t matter who you are: the outcast, the nerd, the average, or the popular, it’s just downright awful most of the time.

Everybody is insecure, uncertain, and too often hurtful to others, as they try to transition from a child into this strange new world of the preteen. Too often, out of that insecurity, girls can get really catty and be downright mean. I’d lived it, and now my precious little girl was living it. 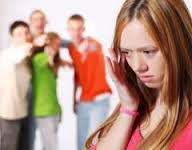 I listened to Arabelle pour out her worries and struggles with a twinge in my heart. I wanted to protect her from these years, but I knew I couldn’t. At best I could help her get through them, and part of that would be helping my very sensitive and insecure daughter to not take things too personally, and to help her believe in herself.

With that in mind, when she began her litany of how she didn’t measure up, I countered with all of the wonderful and unique things about her. And I had a big list that I was determined would help her see her worth.

For every positive I laid out, she counteracted with its negative.

Finally in exasperation she sighed, “I wish I was like you! You’re perfect!.”

“Wait a minute, what?” I turned so I could look into her eyes.

“Well you are!” she answered back to my look of shock, and she began a long list of all my attributes.

was a bit stunned. I sat up and blinked stupidly at her for a while and then finally said, “But you know how imperfect I am better than just about anybody! You live with me! You see the times that I’m impatient or when I lose my temper. When I’m not as thoughtful or as kind as I should be!”

“But mom, you always have a reason for those things.”

“But that doesn’t make them right! It’s still wrong that I do them!”

She shrugged. “I still want to be just like you. You’re my hero.”

I didn’t ask to be her hero. I don’t think I want to be her hero. But I guess it doesn’t really matter if I asked for it or if I wanted it–it’s what she’s made me–a hero, albeit a somewhat unwilling one.

Rather than feeling flattered by that pronouncement, I felt humbled and a little scared.

My mind flashed back to a conversation we had had earlier that day where I had done something that had so clearly echoed my own mother. “Ugh! Grandma just pulled a body snatch on me! Clearly that wasn’t a Mommy thing to do! How does Grandma do that?!”

Arabelle had laughed and said that being like Grandma wasn’t so bad.

I jokingly teased her that she needed to beware, because when she became my age, she would find herself echoing what I do and say in ways that she never thought she would, even in the ways she had vowed to never be like me. “It happens to us all,” I teased her. “I’ll do something and all of a sudden I’ll see a flash of my father doing the exact same thing in the exact same way…it’s kind of creepy!”

She was going to become just like me, the good, the bad, and the ugly. It hit me with a new clarity.

I’m her hero. She is watching me. She wants to be like me.

The responsibility, when you really take the time to wrap your mind around it, is staggering.

All parents, at least all the good ones, realize that they are setting an example for their children. We understand that they are learning based on what we model, but I don’t think we fully understand what it means.

When we become parents, we really are like the potter with a lump of clay, but what we sometimes don’t think about is that, even when we are not actively molding that clay, we are still molding it.

In fact, most of the molding of that clay happens, not from our active working with the clay (active parenting), but rather from the inactive moments. The moments observed by those big, innocent eyes. Not only our observed actions, but our observed inaction. When we fail to act. When we fail to fight for something we believe in. When we let lethargy seep in and cause us to accept less than the best from life and the people around us. When we allow someone to ignore us, disrespect us, or knock us down, and we don’t defend ourselves. When we’re confronted with the obstacles in life and we don’t fight back, but instead give in.

All of these too are children see, and they will follow in our footsteps.

I find myself thinking of all the ways that I don’t want my daughter to be like me. Those are the very things that I need to work on. Yes, there are lots of ways I would be happy to have her follow in my steps I do many things well, but that doesn’t discount the ways that I want her to be better than me, more than I am. 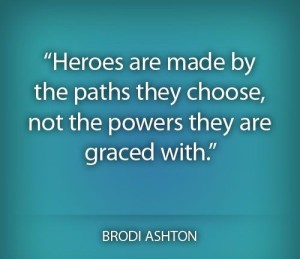 And I am realizing in a way I never have before, that the best way to do that, is to be more than I am. I need to become what I hope she will one do become, so that she has an example walking before her, one that I feel like is totally comfortable with her following–and I’m not there yet.

I know I can’t be perfect. I know I will fail and I will fall, and no matter how hard I try, those failures may hurt my daughter and she will carry some of that into her future. But I need to know that I did my best, that I became the best I could be so that she can be the best that she can be.

I’d better do my best to become one though. There is a little girl who is watching me to see what heroes do, and one day she will echo the choices I made.

That’s an awful lot to live up to!

I believe in destiny, providence, some sort of purpose to this crazy, wonderful and sometimes heartbreakingly painful journey we call life. I'm sifting through the moments and trying to make sense of it all: Love--family--life. My background is philosophy, psychology, theology, and English, and I pull from them all as I write.